We are exploring moving the Geo Web land market from continuous to periodic auctions (i.e. parcel transfers happen during specified, regular windows). This top post will contain a WIP specification that we will edit as needed to hone in on our final design while the replies will consist of our chronological discussion of the design thinking.

I’ve been thinking of this as the license starting its life with an auction. Anyone can form a parcel and put it up for auction, but there is some period where anyone else may submit a bid as well. This would replace the “fair-launch auction” idea.

Otherwise, we would need a fair-launch mechanism in addition to the periodic auctions? I’m thinking that the fair launch can just be auction period 0 instead of design a separate auction mechanism.

Is it appropriate to implement bidding as a commit-reveal system now?

I think we should answer this question first. Having a commit-reveal significantly changes steps 7-10. IMO, a blind auction is very important and we should have it at launch. There are too many unknowns in the economics around MEV and game theory that could have unintended behavior.

Technically, this is fairly straightforward. A hash of the self-assessed value and some secret can be submitted as a bit. This can later be revealed by the user “revealing” the secret. Traditionally, a big issue is where to store the secret. If the user loses it, they won’t be able to reveal their bid. We should be setup nicely to deal with this though. We can store the secret as an encrypted record in the user’s IDX. As long as they have access to their wallet and the record is pinned, they can easily recover their secret.

The one nice thing about the Dutch auction that this would miss is the aligning the opportunity to define the shape of a parcel with the bidder that values “some space” the highest. It might not be that big of a deal, but there would be a race to start auctions according to the shape(s) that you want. Someone might need to win two or more auctions to get the full space they value. Not sure if they’d end up having to price the parts in the auction less or more than the desired whole.

Sounds good. I can make updates tomorrow to reflect this (amongst other changes).

One bit of clarification:

Each bidder must reveal their own bid, right? There’s no way to do a batch reveal of some kind?

The challenge will be getting bids all revealed in a timely manner so the highest (revealed) bid can be processed as the winner. We might need to consider closing bidding and starting this process before the end of the License Period, so that a serial process doesn’t drag too long into the next period.

Hmm, yea I can see how the Dutch auction has different properties.

Maybe a fair-launch, claiming auction could be different, but an auction once the license expires with no bids could have an approach like this?

Each bidder must reveal their own bid, right? There’s no way to do a batch reveal of some kind?

And yea, the “reveal” period should be before the license actually expires. And another “claim” period can be when the new ownership is transferred.

One downside is this requires three steps from a winning bidder (bid, reveal, claim) instead of two (bid, claim).

Do we need to trigger an auction for a claim post-Dutch auction and/or post-no-bid auction? As long as we have a sufficient initial auction period on expired parcels, then it feels like it should be fair game at that point, and we shouldn’t slow down a prospective licensor that is ready to go.

I don’t think another auction is needed post-Dutch fair launch auction. Does there even need to be a separate auction for expired licenses?

If there are no bids when a license expires, and the current licensee ran out of their deposit, this license could be free to claim by anyone. There was plenty of time for people to see the license was going to expire and to submit bids for the next period.

It would be useful to discuss different cases over time. Here are some examples I’ve made, with the License Duration being 30 days

This last case can happen when:

For expired parcels, I think there are two conditions that we’d need to enforce then it would be reasonable to assume that everyone got a fair shot at the claim:

Those seem like reasonable requirements to me and would simplify things quite a bit.

We could add restrictions for the refundable deposit case, but not if using Superfluid flows (or potentially other methods too). I think we need to be flexible enough to handle the case where a parcel can suddenly become available. Maybe the license shouldn’t jump directly to the Reveal stage but have some period where it is still in Bid but expired? See this diagram:

Under commit-reveal, the bid amount is not known at the time of the commit, so bids under the current self-assessed value could always be submitted. This could turn into a winning bid in this case of a license expiring early, or if a license expires without the licensee having another bid or autobid.

Cody and I had a chat last night to talk through the various scenarios and the appropriate way to treat them. There are several scenarios where the answers aren’t yet clear:

Lots of challenges yet to think through. We’ll keep iterating through possible periodic auction designs, but it’s also possible that other continuous designs with some protections built in for the current licensor would achieve our business requirements (lower uncertainty to help a wider audience get comfortable with the system & give some protection to unexpected transfers undermining some use cases/investment).

This has gone through a bit of iteration after discussion in-person when I was in Denver. Three new draft proposals are written:

With a simple diagram of relationships: 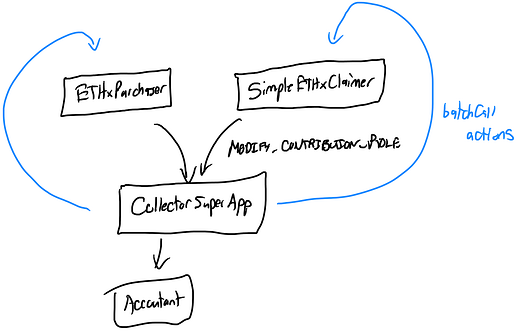 One solution to this is to have the penalty be a % of the difference in the annual contribution rate. Example:

This may seem extreme, but it is mitigated by:

There is a similar issue, not when a flow is closed but when a flow rate is lowered to be less than the sum of all the wallet’s contribution rates. In this case, we have two options:

Awesome work @codynhat! I’m still working through internalizing the full specs, but I’ll drop in my thoughts on the open questions below:

Ok sounds good. We could do it based on the new SAV too. This would incentivize larger value parcels to more accurately set their value? It makes sense for lower value parcels to be penalized less, since you could argue they are more difficult to self-assess. This is sort of a “progressive” penalty?

I was assuming we would support that. But it isn’t required. I will update the proposals to have a Dutch auction bid immediately transfer a parcel.

We can also revert and prevent someone from lowering their flow too much. I believe this is supported in Superfluid. What is not supported is reverting when a flow is closed. Whenever a flow is closed, the portfolio will have to be put up for Dutch auction.

With work progressing on our chosen owner forgiving auction setup (bid accept or reject+penalty), @codynhat and I revisited the mechanics and incentives of our system in a conversation today. The main point we explored were the ways that a bidder could potentially game the auction to artificially decrease the chances of a current licensor matching their bid and/or extracting profit.

As currently constructed, a bidder collateralizes their bid in an amount equal to the outstanding SAV. They are able to set a new, higher SAV at the same time (which doesn’t require any additional collateral). To reject a bid, the current licensor must pay a % penalty based on the previous SAV (or potentially other calcs) AND raise their SAV to the new, higher one set by the bidder.

In this setup, there is limited cost to a prospective bidder bluffing an artificially high SAV that deters a licensor from matching the bid (after a bid is accepted/not matched, the winning bidder can instantly lower their SAV). If this were to happen, the market could (should?) find the fair valuation through multiple rounds of over bidding & lowering the SAV, but this is inefficient (especially with 7 or 14 day bid matching periods) and could allow predatory bidders to extract profit (by reselling the asset to the previous licensor at a price greater than the old SAV, but lower than the bluffed SAV which wasn’t matched).

Based on this, we discussed a spectrum of 4 options to associate cost to the SAV of a bid placed to encourage honesty:

I currently lean toward #3 first and then #2. The optimal answer usually is found somewhere between the extremes. I’m hoping to connect with Anthony Zhang sometime next week for a general intro/talk, so this would be a good discussion question to pose to him.

I’m in favor of #3 as well, assuming the implementation will be quick. If it turns out to be too complicated, #2 may be better to start with.